Ian Miley is a Design Critic and Research Associate at the Harvard Graduate School of Design, as well as a Lecturer in Architecture at Northeastern University College of Arts, Media and Design. Previously, Ian was the 2020-21 Irving Innovation Fellow at the GSD. He studied architecture at the GSD where he received a M. Arch I AP with Distinction, the James Templeton Kelley Thesis Prize, and the AIA Henry Adams Medal. He holds a Bachelor of Arts in Architecture with High Honors from the UC Berkeley College of Environmental Design where he was awarded the Departmental Citation. Among others, Ian has practiced with the offices of Barkow Leibinger, Höweler + Yoon, and Certain Measures.

Exterior view of the BPL hooks house on Topliff Street

All images courtesy of Ian Miley

In her 1989 text, ‘Choosing the Margin as a Space of Radical Openness’, bell hooks describes her position in the ‘margins’ of academia, feminism, and society at large: ‘...not speaking of a marginality one wishes to lose, to give up or surrender as moving into the center, but rather of a site one stays in, clings to even, because it nourishes one’s capacity to resist. It offers the possibility of radical perspective from which to see and create, to imagine alternatives, new worlds.’ This spatialized reading of the cultural periphery, as a kind of antithesis to Hannah Arendt’s ‘Space of Appearance’, marginality becomes a valuable paradigm through which to cultivate and nourish difference, collectivity, and resistance.

In Art on My Mind, ‘Black Vernacular: Architecture as Cultural Practice’, hooks describes a home she imagines as a child: ‘In my dream house there were many places designed to enhance the pleasure of reading, places for sitting and lying down, places for reading and reverie, every bit of space was shaped to be subordinate to these desires. Thus, there were endless stairways and window seats and small rooms everywhere.’

Contemporary domesticity, the triple-decker no exception, is characterized by rigidly demarcated rooms within which expected behaviors are conditioned and social roles are reified. To subvert this excessive codification, the PBL hooks Residence gives more space over to the domestic margin — corridors, porches, thresholds, bathrooms, closets, etc. These oversized margins engender novel, unscripted, and unconstrained forms of social interaction between short- and long-term residents. Intersections of these margins also produce the types of solitary refuge that hooks imagines in her childhood fantasy — balancing an indeterminate, almost awkwardly large common area with the intimate scale of private workspaces, nooks and crannies. 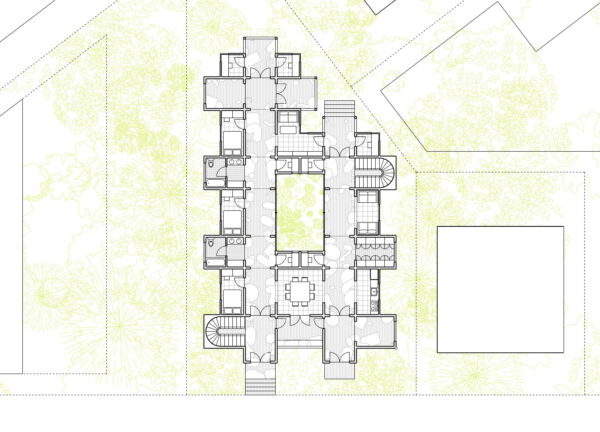 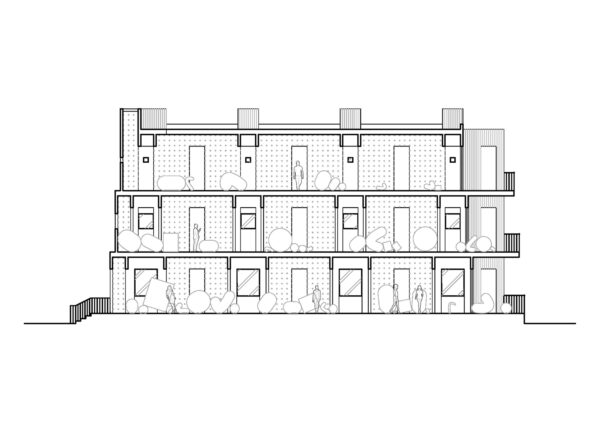 Interior view of the ‘domestic margin’

The Residence occupies the ground floor of the house, claiming the most expansive network of marginal spaces. Corridors are eight feet wide, providing space for socializing, reading, working, eating, drinking, or even sleeping. The long-term residences for more conventional living arrangements occupy the second and third floors; the ratio between indefinite and definite rooms gradually reverting to its traditional proportion by the third-floor apartment.

The Forum, as shown from the south corner of the block’s interior

“Beloved community is formed not by the eradication of difference but by its affirmation, by each of us claiming the identities and cultural legacies that shape who we are and how we live in the world.” bell hooks, Killing Rage: Ending Racism, 1996.

Turning the Tables is a proposal for a triptych of conjoined structures, united with a very long communal table. The oversized kitchen table passes through a series of three cascading volumes, each framing an interior atrium of a distinct character. These atria are shaped by the typological demands of each respective program of assembly; the Forum; the Cafe; and The theater. Programmed surfaces are affixed to the interiors of the atria walls; heavy proscenium curtains in the Theater, a gravity-fed hydroponic system growing various leafy greens in the Cafe, and a library bookshelf in the Forum. The dimensions of the interior and exterior openings vary in response to the specific conditions of circulatory permeability and structural requirements of each of the structures.

Transverse section through the Cafe atrium

The Community Land Trust proposes the utilization of a second kind of CLT; a Cross-Laminated Timber structural system. Composed as a series of large-scale, prefabricated, solid engineered wood panels, the interior and exterior walls are load bearing and monolithic. The offcuts from the facade and interior grid frame are used to build the tabletop and its legs, which exists in a transitional scale and materiality between architecture and furniture. 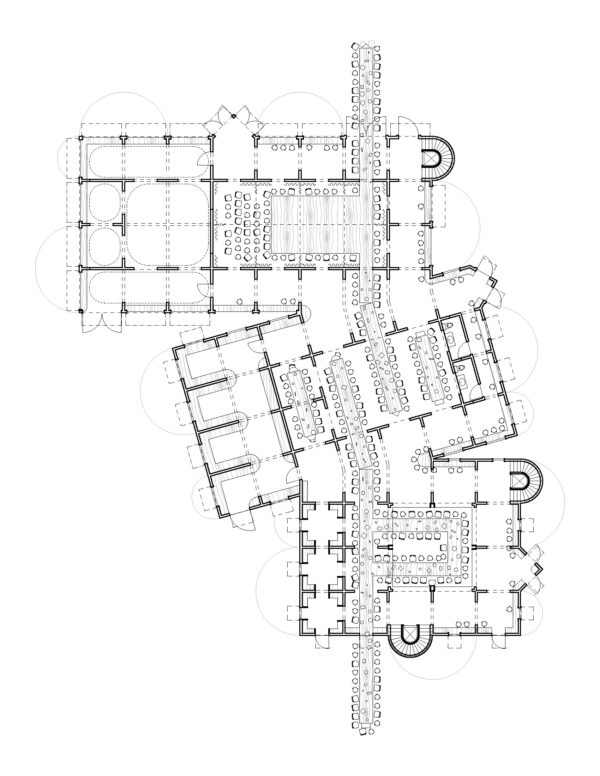 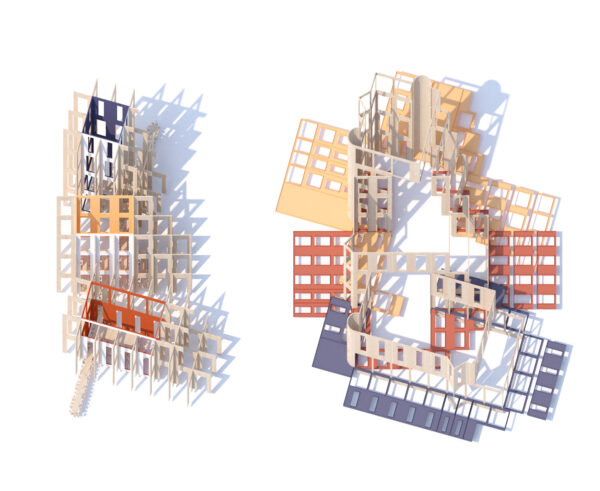 Axonometric diagram of the CLT construction system, interior and

“Knowing how to be solitary is central to the art of loving. When we can be alone, we can be with others without using them as a means of escape <...> Moving from solitude into community heightens our capacity for fellowship with one another.” bell hooks, “Community: Loving Communion,” All About Love, 2001.

The plan is bound at its margins by a 1.5’ wide, 42” high counter, and defined at its center by a 3’ wide, 28” high table. The perimeter counter space provides quieter and more secluded locations for individual work, study, practice, or contemplation. The central table offers a wider surface for collective activity; performing together, eating together, and conversing together. The centripetal nature of the plan recognizes the impossibility of deep communion without a counterpart of privacy and solitude.

Interior perspective of the Cafe atrium