When she was an undergraduate student, Ilana Curtis was searching for a way to spotlight an exhibition about the history of the design and architecture community.

The exhibition, called Now What?!, had been curated by four women who worked with ArchiteXX, an organization that focuses on achieving gender equity in architecture. Now What?! is a traveling exhibition, but those working to develop it had always thought of Boston as an ideal temporary home.

“We always had our sights set on the major cities in the country, Boston being one of those, as there’s such a high concentration of architectural design and design thinkers, because of the offices here, and the location, and all the academic institutions. So Boston seemed like a natural fit for holding the show because of the history and the availability of resources,” Curtis says.

Curtis had only begun working on the exhibition as a research intern through Pointline Projects, the managing body for the exhibition that was founded by Now What?! curator Sarah Rafson, but she quickly became invested in its mission. Bringing the exhibition to the Boston Society for Architecture seemed like a no-brainer. A Boston native, she had been to several BSA exhibitions in the past, and knew of its role as a gathering space and convener for the design community.

“The reach that the BSA has and how it’s a uniting body between all design practices in Boston made it seem like a really good fit, [compared to] a more traditional gallery or a school-specific gallery,” Curtis says. “We wanted to engage with the entire Boston architecture community, not just a school or a specific neighborhood.”

So she made her pitch. The BSA was impressed by Curtis’ proposal... but there was a catch. The exhibition, they told Curtis and Pointline, needed to be modified—and expanded— to better suit the BSA’s substantial gallery space and its public and professional audiences. They offered the curators more funding to do just that.

So began the partnership between Now What?! and the BSA, one that has spanned multiple years and survived a pandemic. Although COVID-19 made it more difficult to implement one of the BSA's asks—that the exhibition add a Boston-specific component—the requirement was fulfilled with the help of people used to working on tight deadlines and in unprecedented circumstances: students.

“From an early stage, we thought about how we could best engage the schools here, to leverage the knowledge and interest of students and incorporate that into the exhibition. Including universities and emerging professionals and students was always part of the plan,” says Curtis.

After completing her Bachelor’s degree, it was off to graduate school for Curtis. Now a Master's candidate at the Harvard Graduate School of Design, she’s still deeply involved with the exhibition she joined as an undergraduate. She introduced the project in a “J-term” course at the GSD, a non-credited course held during the first two weeks of January. The work done in that short time eventually took the form of the ”Changemakers” wall that is prominently featured in the exhibition. 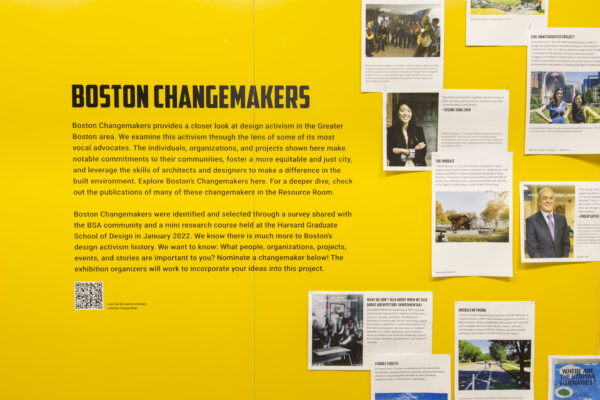 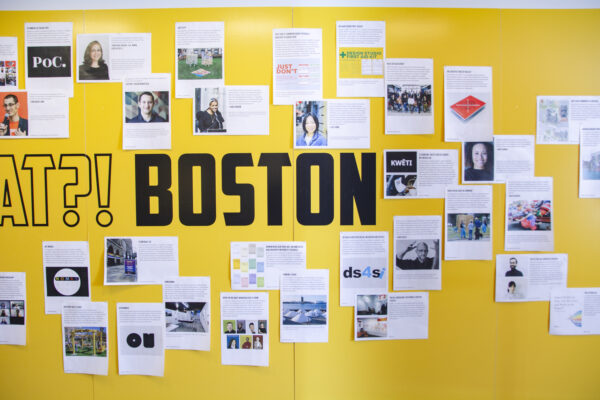 One of the students who signed up for the course was Diana Guo, a teaching assistant at the GSD and a Master’s candidate in Landscape Architecture.

“The class really stood out to me because it was engaging in a real project that would be eventually installed and built,” Guo says. “From day one, we were asked to collaborate, and there was also an opportunity to continue working with the project after the class ended—which was really important since J-term courses are so short.” Intrigued by the exhibition and the Changemakers portion, she participated in a significant amount of the research that went into this aspect of Now What?!.

The Changemakers wall is just that: a wall that prominently features individuals, exhibitions, firms, organizations, and more that have made impactful change in the Boston design community. The exhibition emphasizes visitor participation, and the Changemakers portion serves as another way for it to incorporate a wider variety of perspectives.

“What made this really interesting was that the process of researching was very expansive, and the scope was very wide, so we were able to add in people we knew or we thought were relevant to be featured. So we had this giant, diverse pool of people and connections to draw from, which was then eventually edited down during the curating process,” Guo says. “For me personally, I really enjoyed including professors and classes that I took who I thought were making a really good impact.” She names Jeffrey Mansfield from MASS Design Group and the MIT Mapping Lab as examples.

“The timeline of the exhibition is linear in format—there’s many ways to read it, but it’s pretty formal. We wanted Changemakers to be a little bit more loose, a little more DIY-feeling, so people would feel compelled to nominate themselves, or a friend, or a partner, or a professor—something less restricted,” says Curtis. “Getting people to add to the wall was a really important aspect for us.”

So in light of all this talk about change, what does Guo think needs to change in the profession?

“There needs to be a lot more dialogue between practice and academia,” says Guo. “I did work in practice for a year or so, and I’ve always felt a cultural gap between the two. And I think that’s kind of been happening with practitioners teaching certain classes at schools, but it would be great if there were more crossovers and opportunities for students.”

“One of the main objectives of this exhibit is to bridge that gap,” Curtis adds. “I’m so glad students were involved in the research, because we were able to include students and professors and practitioners on the Changemakers wall in this collective way.”

The four themes of the exhibition: advocacy, representation, academy, and workplace, are also the four broad categories that each event on the Now What?! timeline is grouped into. They reflect the myriad ways in which making change is possible.

“There’s so much information on the walls of the exhibition. But for people with an architecture and design background, one big takeaway should be that the recent history of advocacy within the profession is seeded at the beginning of the timeline—the actions of advocacy and activism we’re seeing now aren’t coming out of nowhere; they’re deeply tied to issues and movements that were happening in more distant history,” Curtis says. “There should be some level of recognition of the past, such that you can project forward and build a better profession.”

“I think it’s important that the exhibition also shows that those who design spaces aren’t just traditionally trained architects, but activists and scholars working together,” says Guo. “It’s expanding the scope of design to not be just a client-driven profession, and even pointing out other things people can do with their degree.”

There are tentative plans for the exhibition to live on through a forthcoming book and digital archiving, but for now, the Changemakers wall is still open for submissions.

“Now What?! and Changemakers show that the exhibition process is a collaborative team effort. I'm so grateful to have collaborated with so many different types of people— it couldn’t have happened without GSD students, without Jessie [Rubenstein] and Mary [Yang], and without the BSA, of course. Collaboration is a great thing in the exhibition space,” says Curtis.

Join us at the Now What?! Opening Reception on Thursday, May 5 at 6 PM. The first major in-person event at the BSA in over two years, the reception is free and will be attended by several of the exhibition curators. “I think the exhibition really comes to life when it’s activated by voices and bodies,” Curtis says.

Read our interview with Now What?! curators Lori Brown FAIA and Sarah Rafson.

Learn more about the project from exhibition designers Jessie Rubenstein and Mary Yang.

Jill Verhosek AIA passed away surrounded by family and friends on April 30th, 2022. A Senior Associate at Goody Clancy, a Boston design firm, Jill was an essential member of the firm’s preservation practice group and the technical advisor on their most prestigious and complex projects throughout the Northeast and Mid-Atlantic.